I would like to introduce you to Goin’ Feisin’s newest contributor. Please join me in welcoming Kate! Kate has offered to allow us to accompany her on her journey as a new feis mom. She has a humorous and refreshing take on the world of Irish dance, and I am so happy to have her on board! Without further ado, I give you “The Diary of a New Feis Mom.” 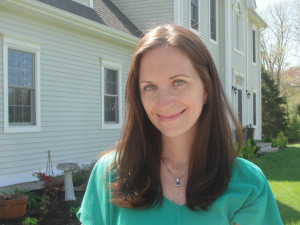 Diary of a Feis Mom

When not being a feis taxi, I can usually be found in the kitchen cooking with my kids and husband or working nights at the hospital on a medical cardiac unit. I’ve always said there needs to be a handbook called “So You’re the Mom of an Irish Dancer”.

I hope this blog can help ease some of your fears and answer some of your questions while laughing at my misadventures as a Feis Mom.

While not blogging, I enjoy working in my garden, sports, cooking, and spending time with my family. Feel free to contact me – IrishDanceMom31@gmail.com.

Learning my Way Around a Reel

Ok, I’ll admit it – I have two left feet. I don’t know the difference between a Reel and a Hornpipe (although I am told there are different shoes involved). But alas, I have a tiny dancer who loves to dance. Irish dance to be specific.

It all started when I took my tiny dancer, Colleen, to a feis to watch a friend of mine dance. My friend, whom I used to babysit for growing up, has been dancing for 15 years, so I thought it would be fun for Colleen to watch her. This is where I had my first lesson on Irish dancing, called Irish time. My type A personality has been fighting a losing battle with this ever since. If they say 2:00 pm, they mean 3:30. And nothing I do, except for maybe speed up the music on the accordion player, which will surely land me in Feis jail, will change this. Needless to say, thanks to Irish time and huge rainstorm that opened up on us at this outdoor feis, we never saw my friend dance that day, in spite of the 3+ hours there. It didn’t matter though. The Irish dancing bug bit Colleen, leaving a big mark to match her freckle-filled face.

Since then, I have watched her dance through the grocery store, at the dinner table, down the aisle at church,  you name it. Most recently, I caught her doing a jig in the shower. I do not recommend encouraging this. It has disaster written all over it!

That October, after a couple months of lessons, she had her first feis. She placed first in the reel and first in the jig. She set the bar high for herself after that. Granted it helped that she was the only one in her comp. But like I always say – “It doesn’t matter if you win by a minute or a mile. Winning is winning.” Or was that Vin Diesel that said that in The Fast and the Furious?

Anyway, after her first feis, she did what most dancers do – they start practicing for the Oireachtas! Talk about being thrown into the deep end of the pool wearing nothing but your ghillies!

One practice a week turned into three to learn the 4-hand Reel for the U8 group. The first few practices were spent learning the Ladies Chain, the Lead Around, and the Wheel. Honestly, it looked like a plate of spaghetti with the noodles trying to fly off the plate to me, but I was told it was coming along. I give kudos to their teacher though – taking two girls age 6 and two age 7 and teaching them this dance in a one month span was rough.

After three weeks of practice (and a week long break for us because of a Disney trip planned), the girls did the 4-hand for the first time at a feis, only two weeks before the Oireachtas. They placed third. Not too shabby. Two more weeks of practice and we were off to Rhode Island.

The Oireachtas was a great time. Of course, I’m partial to say that they were the cutest kids in the U8 4-Hand. And I’m not only saying that because when they went out on stage the crowd gushed (I swear it wasn’t just my mother sitting next to me). Timing was there, butt kicking was there, and points were there. It was left in the judge’s hands after that.

After they danced, we took the girls to have their picture taken with the Irish Dancing Magazine (which ended up in the magazine – how cool is that?), as well as to have a professional picture done to commemorate their hard work for their first Oireachtas. Then it was time to check the dreaded recall board. Walking up to it, all I heard in my head was the Mission Impossible theme. I wanted to do a forward roll over there to sneak a peek. Checking led to a few tears, as their number was not on the board. They recalled the top 17. But in the ever fast paced mind of a 6-year old – Oh look, a t-shirt vendor! A couple weeks later and we got the official placement: 20th. They missed recall by three. We were all so proud of them! And as the teacher told them…

There is always next year…