Is It All About The Dress?

Just about every weekend, all across North America, and the world, you will find hundreds of girls and women applying their stage makeup, unrolling the curlers from their hair or putting their hair up into a strange array of ponytails to clip their wigs into so they won’t fall out, and stepping into blinged out dresses. Yes, Irish dance is a whole different world. If you’re just entering the world of Irish dance, those dresses may seem to be pretty strange. In many ways, there isn’t much that is Irish about them anymore, but there is a reason behind them.

According to John Cullinane, “Step dancing goes back to approximately 1750. The major milestone was in the 1890s, when we had the formation of the Gaelic League. In West Cork, in a town called Macroom, the Gaelic League decided to have a Sunday afternoon of competition in Irish language, in Irish literature and in Irish dancing. About six people competed in the first dancing competition, called a feis.” Back then, the traditional costume consisted of a shawl draped from the shoulder, across the back to the opposite hip, held onto the shoulder by a Tara brooch (Irish national emblem), and a lot of hand done Celtic embroidery.

When Irish dance first entered the mainstream, the dresses had evolved into three paneled dress with lots of Celtic embroidery. They were known for being extremely heavy and difficult to dance in. As Irish dance became more popular, the dresses evolved. In an effort to make the dancer stand out, the designs became more elaborate and flashy. Today, dance styles change rapidly, but they always seem to incorporate more embroidery and bling. The emphasis being the “more!” 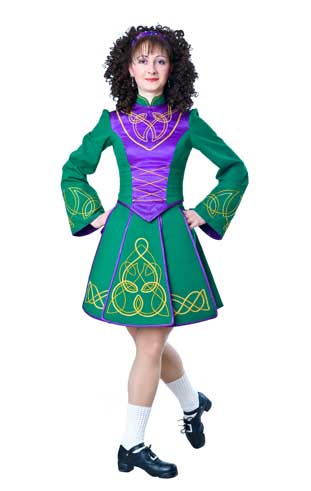 Every time you see an Irish dance dress, the first thing you should know is that those girls worked hard to get them. Every school is different, but usually when a dancer starts out, they have a simple costume. For each successive level earned, the costume gets a little more elaborate.

In my daughter’s school it was:

Again, each school is different, but a similar path is pretty standard.

According to Joni Muggivan, TCRG, the answer is both yes and no. If you are attending the upcoming North American Nationals, or similar major competition, and expecting to recall, then I’d say yes, the dress is important. What is always more important is the dancing to back it up! A dancer in a fancy dress that does not properly point their toes should really be focusing on other things.

A dancer in a Novice or Prizewinner competition should focus on a nice appearance, but they do not need an expensive dress. I think most judges focus on timing and technique much more than appearance. In fact, I think most judges would prefer to see dancers in an age and level appropriate costume. Many used dresses, class costumes, or more affordable dresses are available that will give the dancer a nice look without looking like they are trying to be something they aren’t yet.

Should I Buy Used Or New?

Should you buy a used dress or have on designed for you? That’s a great question, and the answer is that depends. When you purchase a new dress, you will work with a designer to come up with a dress that is designed just for you. Your TCRG will also want to have a say in the dress design. A new dress can cost more than $3,000, but you can usually work with a lesser known designer and get them for between $1,500 and $2,000.

Where Can I Get A New Dress?

There are many options available if you want a new dress:

Where Do I Buy A Used Dress?

There are a number of sources available when looking for a used dress:

Ask the TCRG is brought to you by Goin’ Feisin’ and Joni Muggivan, TCRG. Joni Muggivan has been a TCRG for 10 years. She runs the Muggivan School of Irish Dance and has three successful dance studios in New Orleans, LA and Richmond and Fredericksburg, VA. She is 100% dedicated to promoting the art and culture of Irish dance, and in addition to her multiple dance studios, also runs the only Irish dance camp designed to bring Americans to Ireland, Dance on the Shannon. She also serves on the Board of Directors for the Irish Festival, Irish Fest New Orleans.